A surprise bubble mailer from Marc Brubaker arrived last week. I’d sent him a bunch of the Astros from Jeff’s mailday and those have now been transformed into Giants and Stanford cards I didn’t have. Not a lot has been going right hobby-wise this year with cards becoming impossible to find in the store* but thankfully card twitter is doing its thing and circulating cards until they find their forever homes.

*In a somewhat ominous sign my kids are no longer saving their allowances for baseball cards.

Marc has obviously had better luck than I have in finding cards in the wild though he also clearly isn’t as picky about what packs he buys. The four releases here are all things I don’t purchase but which add a bit of variety to the binders.

The top row of Archives is actually kind of fun. The Piscotty in the 1974 design looks pretty nice and they chose a very 1955 Bowman photo for the Hoerner.* The 1955 TV design is one I really didn’t like but it’s grown on me a lot.

*The backs of these 1955 inserts though are professionally embarrasing. I’m annoyed at how relics/autos have useless backs which just state what’s on the front of the card but at least those still serve as a certificate of authenticity of sorts. And I can excuse online-only releases as a “jam them out as fast as possible” cash grab. But doing these half-assed backs in a retail product is inexcusably offensive to me as a designer. As is the fact that multiple people laso signed off on it. Peak milking a cash cow and zero professional pride.

This year’s Panini/Donruss/Optic design isn’t half bad either. They’re still operating on the “let’s evoke late-80s/early90s Donruss” wavelength that makes their products look mostly indistinguishable year in and year out but they’re gradually doing a better job with team colors. Would be nice to see them really lean into the team color thing and use two colors for each team sometime.

And this is also my first 2020 Bowman in hand. I should get more of these just in case we have games at Trenton next year since it’s a nice simple design that’ll look good signed.

Marc also included a bunch of Allen&Ginter including one of the only cards I was actively going to look for. I don’t like Ginter as a baseball card set. I do like the non-baseball subjects and this year Brianna Scurry was one I really liked.

Most of the time Ginter’s fake-paint, fake-stipple photoprocessing looks pretty bad. This year though the photos look surprisingly good. Is a shame that the design is doing this weird double shadow thing where the drop shadow on the photo is coming from a different light source than the drop shadow on the brand name. This isn’t as obvious in the gold minis though so that’s pretty cool.

Beyond the new cards, Marc included a bunch of random coolness, none cooler than these three 1968 Dexter Press cards. These are nicely-printed glossy postcard-sized cards. Colors really pop and there’s lots of nice detail.

I especially like the Jim Wynn with the spring training outfield fence in the background but the John Bateman and Ken Aspromonte show off the Astrodome logo patch better. No idea why Aspromonte is wearing his batting glove on the upper hand though.

1991 Donruss is one of those sets where there are two different versions of each card,* one released in packs and one in the factory set. The two Bud Black cards here show both how the borders can be different and how unless you know there’s a difference you can totally miss the fact that there are different borders.

*Three actually but I don’t care at all about “INC” vs “INC.” in the small text on the backs.

Marc apparently came into a factory set of these, decided he just wanted the Astros, and figured that sending out team sets to various team collectors would be fun. For me he also included a few of the Stanford guys in the set as well. The Stanford guys look nice paired in the Stanford binder but it took me a while to figure out how I wanted to display the two different variants in my Giants binder.

I eventually settled on having alternating pages of set/pack cards so I can flip back and forth and see the differences. There are a few empty spots for cards that don’t have multiple versions (eg the Gary Carter Highlight) but I’m happy with the result. 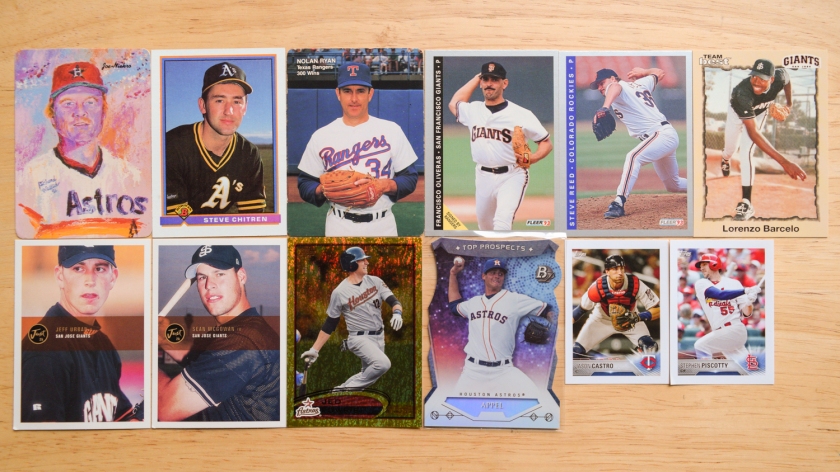 A few more random cards including a pair of Mother’s Cookies cards I didn’t have. The Joe Niekro is from 1986 and is part of the all-time Astros All Stars set. Mother’s Cookies also did a set like this for the Giants in 1984* as part of the All Star game at Candlestick that season so it’s only fitting that the Astros got one when the game was at the Astrodome. The Nolan Ryan goes nicely with a card I pulled out of a bag of Iced Animal Crackers** three decades ago.

*Albeit with more of an Allen&Ginter style design.

Two 1993 Fleers I didn’t have. Steve Reed isn’t exactly a Giants card but he’s wearing the uniform so I have no problem sliding him into the binder. A couple Just Minors cards from Marc’s recent break which I now feel a little bad about not entering except that I really don’t actively seek minor league cards. They’re fun to add to the binder but I’ve never sought them out. This design though is an interesting one with the bar across the middle of the card and the photos sized and cropped so as to place the player’s face in the section above the bar. I don’t like it but much to my surprise I don’t hate it either

A 2012 Jed Lowrie which is some fun color but also fills a hole I didn’t realize I was missing since I didn’t have his 2012 flagship in the binder yet. A fun diecut of Mark Appel. And finally a pair of 2018 Stickers which feel so underwhelming now that Topps has switched to card-sized stickers.

Last batch of cards in the envelope were these Twilight Zone and Star Wars cards. The Twilight Zone ones are from this year but there’s unfortunately no Mighty Casey card that would allow me to sneak a post onto SABR. They’re still pretty cool though. The Twilight Zone is my favorite TV show of all time and seeing these imagined episode posters is pretty neat.

The Star Wars cards are from 1996 which is definitely a long time ago in a galaxy far far away now for that franchise. This is before the Special Edition rereleases let alone the prequels when the only expanded content out there were things like Shadows of the Empire. These cards were part of that multimedia blitz which were intended to prime the pump for the Special Editions. I don’t remember them at all though I do know that people were hyped for the movies to come out again.

2 thoughts on “Mailday from Bru”