On Father’s Day the Trenton Thunder invited everyone who had been in the Kids Club in 2020 to a day at the park. They had dollar hot dogs and free popcorn and soda. The kids could take part in various activities like hitting from home plate and running the bases. It looked to be a fun thing to do and so I duly took the boys. 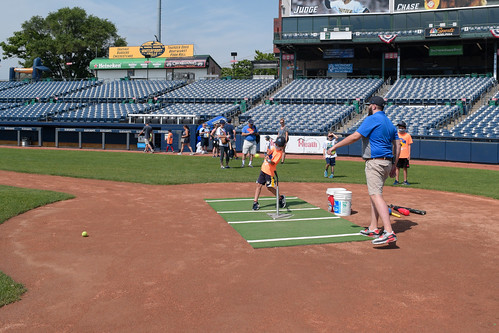 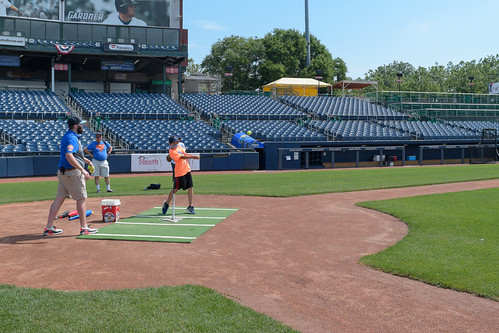 We had fun. Good to be back at the park and remember what it felt like to be in the stands even if there wasn’t a game. Also good to see that we felt relatively safe there. Which is why when the Thunder offered us half-price tickets to any upcoming Tuesday night game I decided to get some.

So last Tuesday we went to our first game since September 2019. It’s been way too long. I should’ve gotten more than one game’s worth of tickets.*

*Seriously though, until the kids can get vaccinated I reserve the right to turtle the family at home for a month and committing to multiple games is not something I feel comfortable doing yet. As much as I’d love for this post to bookend my start of Covid post, we’re not out of the woods yet.

We ended up with seats four rows off the field, right behind the plate. The boys have never sat that close before and it would’ve been plenty of fun if that was all that we did. But it turned out to be quite the event-filled night out.

It was a mystery giveaway night so we all got bats. Not full size but not mini either. Two-foot bats are big enough to actually use and kind of scary as giveaways.* I’m glad I brought a bad to put them into otherwise the boys would’ve been swinging them all game and there’s a decent chance someone would’ve been accidentally noggined.

*Though not as scary as the metal BBQ spatula and fork set a couple years ago. 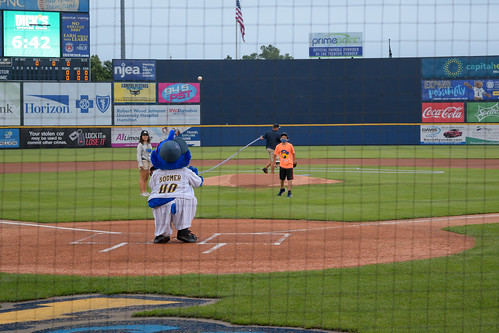 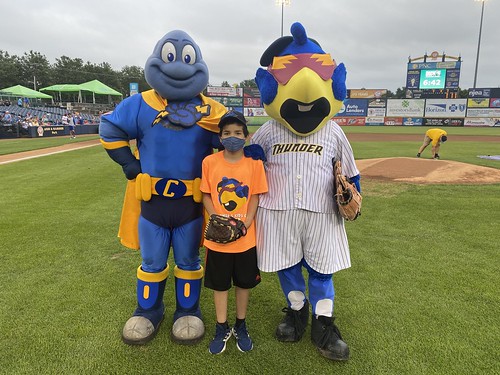 Oh, also it was kids eat free night so they each got a free hot dog, bag of popcorn, and soda. Plus dollar hot dogs for the rest of us. No complaints here.

No complaints about the weather either. Kind of a perfect balmy night. No rain in sight. A crisp well-played pitching duel (even though the teams combined to go through nine pitchers) which the Thunder won 2–1 by coming from behind and scoring 2 runs in the bottom of the 7th inning. No pitch clock in AAA but we still clocked in at ~2.5 hours.

And we even got some autographs. Turns out the Trenton/Buffalo coaches feature a couple guys who have a ton of junk wax cards (including in the 1991 sets that each of the boys has). We only got manager Casey Candaele’s autograph after the game but it was a wonderful way to wrap up a perfect night. I got these two signed—I love the 1993 photo and it looks better on-card than in the scan—while the boys got a 1991 Topps and 1991 Score from their sets.* Unlike a lot of the times when I’ve wondered what their connection to an autographed card will be, Candeale has an obvious hook due to his brother and mom’s relation to A League of Their Own.

*My eldest is up to five (I think) 1991 Topps cards signed from his set while this is my youngest’s second 1991 Score. This isn’t a project as much as a fun way for them to use their complete sets as a way of elating to the players.

The boys went to bed a little late and took a while to fall asleep since they were both a bit hyped up.

For my part I’m less excited and more almost relieved. Feels nice to do something normal again. But even besides Covid, it’s great to remember how much going to a ball game—especially a low-stakes minor league game—just relaxes me. I can enjoy the good plays but just the pace and ambiance does wonders for my peace of mind. I hope I can get to some more this summer.