A couple weeks ago, Matt over at Bob Walk the Plank pinged me to ask if the boys and I had any Series 2 or Bowman needs. Considering that we’d not ripped any product yet this year,* the answer was a definite yes. The nice thing with collecting with kids is that they enjoy the commons as long as they’re Giants. Which makes it very easy for people to unload extra base on us.

*We’ve since ripped some Series 2 as of National Baseball Card Day last weekend.

A few days later I received a bubble mailer of cards and sure enough there were plenty of Giants cards to go around. I distributed a bunch before I remembered to take photos so there was more than is pictured in this blog post.

Two decent stacks of Bowman and Series 2 were a lot of fun. Not much to say about the Series 2 except to note that the Tony Watson really confused the boys. He’s in the checklist because Topps doesn’t update its checklists when players are free agents. Even though Series 2 releases in mid-June, it wasn’t able to catch that Watson had signed with the Phillies in February let alone that he’d subsequently signed with the Angels in March AND made their Opening Day Roster.

To be clear, this isn’t why the boys were confused (Jeff Samardzija is also in the checklist despite having been released by the Giants last September). What got them was that Watson was traded back to the Giants at the Trade Deadline and they thought, for a moment, that somehow Topps had already produced a Giants card for him rather than Topps being three transactions behind.  I’m really curious if he’ll get a card in Update with the Angels now.

There were a decent number of Joey Bart Bowmans as well as a shiny Hunter Bishop which caught me by surprise since this was supposed to be excess base. Nice to spread the Bowmans around as well but it’s really the Series 2 that the boys enjoyed most. 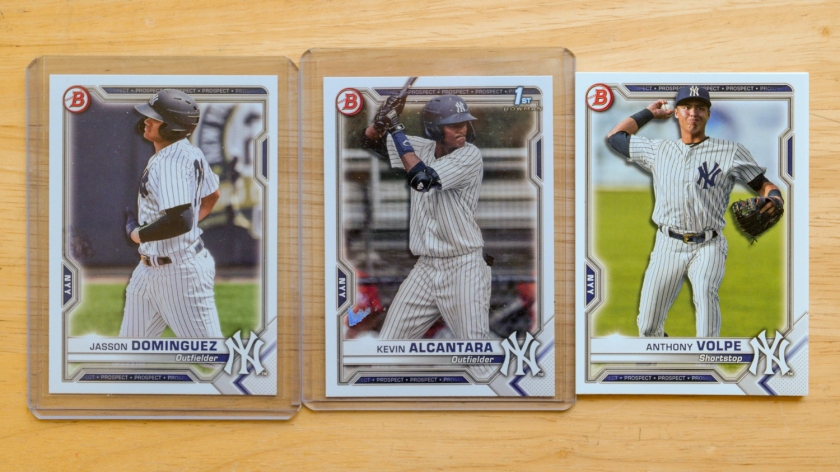 They may change their mind on Bowman in the next couple of years. In addition to the Giants prospects I also asked for some excess Yankees prospects since Somerset is our local Minor League team and it’ll be nice to try for some autographs there once Covid restrictions are lifted a bit.

Matt was very generous here too with a couple guys who are biggish names already. These are going in the Yankees Prospect box which I’ll check against the Somerset roster next time we go to a game.

One thought on “Walk the Plank Mailday”