It’s cold this week but last Saturday was one of those weird spring days which alternated between being cold, drizzly, & miserable and being warm & sunny. Not the best day for a baseball game but with Princeton not having played a season in 2020 and 2021 I was well overdue for some college ball and there was no was I was going to miss the game.

As much as I love pro baseball, I spent way too many years going to Stanford games and associating the ringing of metal bats and chatter from the dugouts with the true beginning of the year. My soul needed the reset especially after the past couple of years. 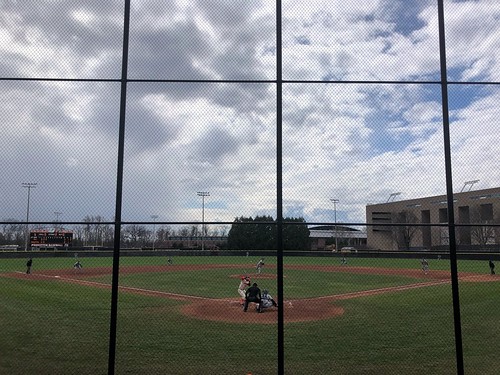 Yale was in town for both the home and Ivy League opener and while Ivy League ball isn’t to the standard of Pac 10* ball it was a nice crisp game. Made it through four and a half innings in an hour with starter working quickly and into and out of jams. Both struggled in the 6th as Yale strung some hits together to manufacture two runs before each team hit a solo home run. Then the last couple innings were a return to form.

*Having never ben to a Pac 12 game I’ll have a hard time calling it that. I really just miss the original Six Pac which I grew up with.

Princeton rallied in the bottom of the ninth by putting runners on the corner with one out and getting the go-ahead run to the plate. Unfortunately, while the scored a second run on a sacrifice fly, Yale threw out the runner trying to advance to second and ended the game with one of the weirdest sacrifice double plays you’ll ever see. An exciting end for Yale and a gutting one for Princeton as he game ended 3–2.

We didn’t stay for the second game* since the weather looked to be deteriorating and the boys were getting cold.** We did however manage to get cards signed by both John Stuper and Scott Bradley before we headed home.

**Game 2 was not as crisp either with Princeton making 6 errors and Yale scoring seven runs in one inning en route to a 14–8 win. It also snowed on Sunday so we didn’t even think about going to the final game.

Stuper has been the Yale coach since 1993 and is a really nice guy. He chatted with us as he was signing and I know he’s been good to people via TTM as well. The boys like that he won a World Series in 1982.

Bradley meanwhile has been the Princeton coach since 1998. I asked him about the 1986 Donruss card where he’s holding four gloves and he said it’s because he was goofing around and having some fun with the photo due to being a utility guy. While I was aware of the four gloves I had not noticed that he was listed in three different positions on the card as well.

Nice to get Bradley’s signature out of the way in game one too. My eldest continued his 1991 Topps quest (he’s up to eight cards now) and now we can just go to subsequent games this year without looking out for autographs.