It’s been a rough couple of weeks. Spring break always throws me for a loop plus I’ve had some dental issues,* we’re planning for summer, omnipresent COVID uncertainty,** and the general state of the world between the Ukraine disaster and the Supreme Court getting even more illegitimate than I expected. All of which has left me feeling like I just need to find a way to meditate for a day.

*Nothing crazy but I had to get an extraction.

**Some local schools are reverting to mandatory masking due to local spread.

Yesterday I got my daily email from the Somerset Patriots and noticed that the game was scheduled for 11:00am. I had had this circled on my calendar ever since schedules were released but have been so out of things that I hadn’t even noticed it coming up.  Since I haven’t managed to get to any games anywhere since I froze my ass off at Princeton in March* I made the quick decision that what I really needed was to hit another baseball game.

*I do need to get to more Princeton games but kid sports have started to interfere there plus our weather has been crap. 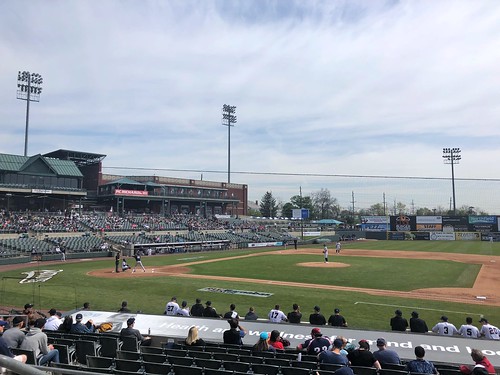 So I made the drive up to Somerset and confirmed that yes, I really did need to hit another baseball game. I was a bit worried in the first couple innings as the teams combined for 9 runs in about an hour of gameplay. New Hampshire jumped out to a 5–0 lead through an Earl Weaver (after putting guys on via walk and HBP) and a two-run shot before Somerset loaded the bases (via dropped 3rd strike, walk, and infield single) and Michael Beltre hit a grand slam to turn it back into a game.

Things settled down after that though. Somerset strung a bunch of hits together in the fourth—scoring four runs and threatening more before running themselves into an inning-ending double play—but we went from what looked like a possible four-hour game to one that was the standard three-hour length.

The 9th inning got kind of scary though since the Somerset closer quickly gave back two runs via another two-run bomb and then let another two guys reach base (both via bunt!) with only one out. Luckily New Hampshire ran themselves into a game-ending double play and Somerset hung on for the 9–8 victory.

Not super crisp but decent baseball. Also very nice to see this level of minor league ball again too with players who are all prospects dreaming of the show but which are also mostly guys who have a legit chance of at least a cup of coffee.

I decided to hang around afterwards for a bit and test my luck with autographs. It feels like forever since I’ve done this. Getting coaches to sign is easy. Players? I last did this in 2019. The big name in Somerset is Anthony Volpe. I did not get his autograph though he did use my pen to sign for a dozen kids. He seems to be a reliable signer after the games but (correctly) prioritizes kids.

I did however get the grand slam hero of the game, Michael Beltre, on my ticket stub. The perfect memento for a day I sorely needed.

I also got a few other Somerset prospects. Josh Breaux is currently injured and didn’t play. Nor was Luis Medina, the only guy on he Yankees 40-man roster, scheduled to start (though it was his birthday so we all wished him happy birthday after the game). Blake Perkins didn’t get into the game but Jeisson Rosario made a few nice catches in left field including getting to a ball that the baserunners in the ninth didn’t expect him to reach.

The autographing was mostly fun. Good weather and a few little kids to bring smiles to everyone’s faces. A couple of the older guys who are clearly in it for the money got on my nerves a little bit as they bitched about Volpe being a punk because he tries to duck them and has started signing AVolpe or AV now. But for the most part it’s still fans who go to the game and do this for a hobby.

4 thoughts on “A mental health day”