The biggest problem with Trenton being in the Draft League now is that the season doesn’t start until June. This is a shame since I really like the Trenton baseball experience and cutting over two months off the season makes me feel like I’ve been robbed.

Anyway the season finally started and my youngest and I made our way out to the ballpark last Friday night. Frederick was in town and their coaching staff is all former Major League players so we got there early to hang over the rail. This is a lot of fun with the low-key nature of the Draft League. Zero autograph hounds prospecting just a couple older fans who remember guys from their youth.

Which meant that we just got to hang out at the railing and watch the grounds crew set up the field and just get ourselves into the mood of things. It’s relaxing just being there and my youngest is perfectly happy to pay attention to how the field is set up before the game and get fist bumps (and a lump of gum) from the players as they warm up.

We had great seats for the game too, Right behind the dugout just safe enough behind the screen. Draft League games seem to be pretty fast and crisp. Maybe not the best defense but the pitching is good and Trenton puts on a good show so you don’t realize that you’re at the lowest possible MiLB rung.

They really do deserve a full season team.

So we got a crisp 2–0 Trenton win in about two and a half hours. Frederick was held to one hit and aside from one string of three singles in a row, Trenton never manufactured much danger either. Might’ve been a little quicker but the last half of the game was a bit Spring Training-like with wholesale substitutions from both sides that made keeping score a bit of a pain. 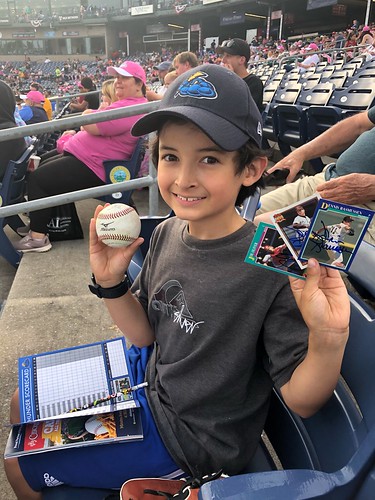 All in all a perfect night with the only blemish being that they sold out of Pork Roll by the third inning. My youngest got autographs from both Joe Oliver and Dennis Rasmussen. We’d gotten Oliver a couple years ago but since then my youngest had picked up a 1991 Score set that he’s working the same way my eldest is working 1991 Topps and getting cards signed by all the coaches that come through town. To-date that’s been Joe Oliver, Brian Harper, Frank Viola, Casey Candeale, Jeff Manto, Derrick May, Scot Bradley, and Dennis Rasmussen.* And he also got a practice ball and some scorekeeping practice.

*We’ve missed a few too including Devon White, Pete Incaviglia, and Jim Gott.

Was fun getting a chance to talk to Rasmussen and Oliver too. This level is very laid back and I can see they’re enjoying teaching. Rasmussen was wearing an MLBPAA shirt and seemed tickled that I both noticed and liked it. Oliver meanwhile was chilling in the dugout when one of the players noticed my youngest had a card and went to bring it to him. So he came over and chatted a bit.

Yeah I also got a handful of cards signed. Nice to add Rasmussen and I picked two Oliver cards with photos I really liked. I got Angel Sanchez after the game and that was fun too. He seemed a bit surprised that I had cards and when he was signing all the Spanish-speaking players crowded around to take a look and were excited to see them. Sanchez asked to keep a card as well.

One thought on “Back in Trenton”