A couple Christmases ago my eldest received his godfather’s set of 1991 Topps. When we started going to Trenton Thunder games that spring I realized that a lot of the coaches coming through town were players in 1991. And so a project was born. That year we tried to get as many of his 1991 Topps cards signed as we could.

Turns out it was just four—Joe Oliver, Brian Harper, and two Frank Violas—but we had big plans for 2020 and were excited to continue. Yeah that never happened, but during that year my youngest ended up with a set of 1991 Score and so he decided to join us on this quest in 2021.

We’ve been working them the past two years now. Casey Candeale. Jeff Manto. Derrick May. Scott Bradley. Dennis Rasmussen. It’s been a lot of fun and gives them an entry into those 1991 sets.* They may not know all the players but they’re connecting to them as coaches. And by being pulling cards they end up really looking at the sets and how their photography is different.

*I have previously wondered about what it means to collect cards of players you don’t know.

It’s also just been fun for my eldest’s godfather to watch as well since it’s not just letting a set sit in storage they’re doing something with the cards. Every time we get one signed I send him a text to show the new addition.

My eldest is up to ten cards now.* In an ideal world this would be twelve but we missed out on Devon White with Buffalo/Trenton and Pete Incaviglia with Sugar Land.

My youngest meanwhile has seven. He missed out on Oliver, Harper and Viola in 2019 but picked up Oliver this year.

The interesting thing this year is that these went from being a bunch of individual projects to something we’re all doing together. When we got Dennis Rasmussen’s autograph, my eldest couldn’t make the game but my youngest insisted on bringing the Topps card. He was just as happy, if not happier, to get a card signed for his brother as he was to get his own signed.

Last weekend neither boy could make the game so I ended up going alone. Jim Gott was the visiting pitching coach and was super nice abut signing the boys’ cards but also signed a couple for me as well.

I was only going to ask for the 1986 (I usually limit myself to two so pushing to four felt wrong) but he just asked to sign everything. I’d gotten him TTM a few years ago but in person is always better. I texted the boys a photo of their signed cards as soon as I sat down. Very fun. I won’t make a habit of doing this for them since the entire point is that we’re doing it together but once in a while is acceptable. Plus Gott was another guy who we’d missed last year.

I also got a pair of cards signed by Trenton pitching coach Shawn Chacon. Chacon may be most famous for how his career ended but hung around in the majors for eight years before then. This was another fun request where the Draft League players got super excited to see their coach have real MLB baseball cards. Just goes to show how much cards mean in terms of having made it to the show. 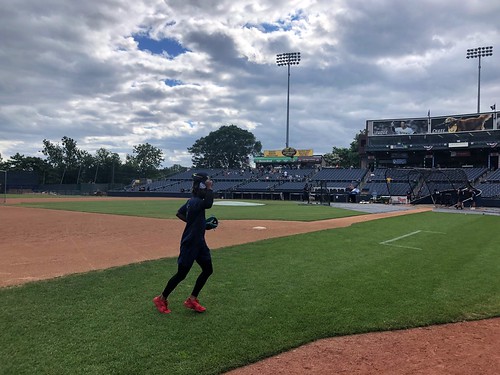 Anyway aside from the autographs Trenton opened the stadium a half hour earlier than usual which meant that I got to watch batting practice for the first time in ages. Game started off great too. Super crisp with the Trenton pitcher being lights out in the first three innings.

Sadly the wheels fell off in the 4th and he game degenerated into everything you’d fear about the draft league. Bad pitching. Sloppy defense. Local fans weren’t happy and I can tell they’re not used to this level of play after a couple decades in AA.