It took a while after getting my first Liebig set but I finally picked up some more earlier this year. The oldest one I grabbed was from 1925 and features “the most beautiful piazzas in Italy.” The artwork is great with vibrant chromolithography that works perfectly with the scenery but the main reason I got the set was because half of it depicted places that I’d visited in my first trip to Europe twenty years ago.

I’ve only been to Europe a couple times but my first trip was to Italy. While we flew into Rome our tour group immediately got on a bus to Assisi. Which mean that my first real experience was making the walk to San Francesco and seeing that piazza for the first time. 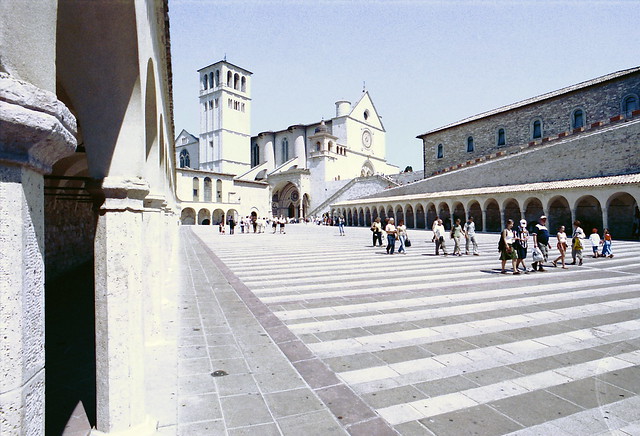 Replace the monks with tourists and you have pretty much exactly what I saw. I really like the night scene with the stars and the way the stippling adds texture to the roof. There’s also a lot more wear and tear visible on the buildings. When I visited, the rebuilding after the 1997 earthquake was just about complete and everything looked so brand-spanking new that the whole town felt a bit Disneyfied.

I also visited Florence and Venice on that trip. No photos that match these views but the images are still great reminders. As with the Assisi photo I love the skies and the way the stippling provides texture on the buildings. It looks like stone on the Palazzo Vecchio and simulates the design on the Palazzo Ducale.

There’s also something wonderful about chromolithography in the way small bits of color remain incredibly vibrant. This is most evident in the San Marco detailing but you can see it in other parts of the cards as well.

I don’t want to say that being in these old Italian cities is like being in a time machine but it’s impossible to not be aware of the history of the place and how it’s been depicted in various media over the centuries. Seeing them on 100-year-old cards and how they’re very much the same (aside from being less crowded) is a bit of the same phenomena.

The other three cards in the set are Rome, Milan, and Trento. I would have loved if there were a Siena card but alas. I don’t have much to add about these aside to say that the flowers on the Spanish Steps are fantastic and I can’t not think of Richard Scarry* whenever I see them in an image. Also the skies continue to be fantastic as does the stippling detail and texturing.

The Trento card however does deserve a few notes. This set is dated to 1925 which puts it right at the border of Mussolini going full fascist and declaring himself Duce. I can’t help but note the basic Italian tricolor without any additional flags or markings which makes the card almost dateless instead of being clearly fascist. At the same time, that piazza is no now named the Piazza del Duomo rather than after Victor Emmanuel III and I wouldn’t surprise me if that changed happened in the post-WW2 years.

The backs are blurbs about the squares. Some, like Assisi’s are pretty brief. Others are a lot more involved.

San Francesco in Assisi celebrates the life of Saint Francis, was designed in 1218, and features gothic architecture influenced by Germany due to German architects helping after construction difficulties.

In Florence, the Piazza della Signoria is formed by the Palazzo Vecchio (built in 1298), its 95-meter bell tower “La Vacca,” and the Loggia dei Lanzi (with Andrea Orcagna given credit for the design). The card also mentions Cellini’s Perseus and Donatello’s Judith and Holofernes as being in the Loggia a well as copy of Michelangelo’s David in the square. I need to point out that Judith and Holofernes was in the Loggia from 1506 to 1919 when it was moved to the front of the Palazzo Vecchio which makes either the card or the dating of the set incorrect.

The Venice card lists seven of the buildings that make up the piazza and then handwaves the rest. This takes up most of the card back but it also mentions that the Venetian republic was very prosperous at the time of construction. It also specifically addresses how the campanile collapsed in 1902 and was subsequently rebuilt in 1912.

Rome is clearly the first card of the set since much of the back introduces the set theme and how an Italian piazza can stand in for the entire city in representing the region, the way the buildings form the square, and reminding us of historical moments. It doesn’t say a lot about the Piazza de Spagna aside from noting the steps, Trinità dei Monti, and Bernini’s fountain.

The Milan card is interesting because it claims that a statue of Oldrado da Tresseno was the first equestrian statue of the Middle Ages but said statue has since vanished and been replaced with a well. Replacing a statue with a well seems weird to me plus I can’t find anything online that suggests that such a statue existed. There is a statue/relief of Tresseno on horseback on the Palazzo della Ragione, which the card describes as “the most glorious building in Milan” (l’edificio più glorioso del Comune di Milano) due to its place as the center of official communication. The card also mentions that the colonnade of that palace has interesting acoustics, ostensibly to encourage the discovery of conspiracies. Finally it mentions the Loggia degli Osii (oddly spelled as OSII).

Finally, to Trento and what’s now known as the Piazza del Duomo. According to the card this was known as the Piazza Grande before it was named after Victor Emmanuel III. The fountain of Neptune gets special mention due to Trento’s Roman name being Tridentum and Neptune’s trident therefore being the symbol of the town’s name. The Cathedral and its construction from the 10th to 16th centuries is also mentioned (but not the Palazzo Pretorio whose bell tower features so prominently on the card) as is Santa Maria Maggiore which, despite not being pictured at all, gets a call-out as the location of the Council of Trent.*

*All of a sudden why the Tridentine Mass is named what it is makes sense to me.

Is funny. In typical pre-war fashion, the cards which most attracted to me to the set ended up being the ones that I was least interested in once I read the backs. I had zero interest in the Trento card until I really looked at it but in some ways it’s the most interesting of the set.