A couple weeks ago Matt Prigge had the excellent idea to roll his own ToppsNOW/Upper Deck Documentary set for this season. Such a wonderful idea. The promise of those sets is in their potential for creating a summary of the season—the kind of thing fans of each team will want to look back on once the season completes.* The reality of these sets? Unfortunately not so much. Topps hypes the same teams and players it hypes in its regular releases and ignores large portions of the country. And Upper Deck reused photos ad nauseum so cards became indistinguishable from each other.

*Note, as a Giants fan, I’m fully aware of how you might not want to look back on a season.

Realizing how we don’t need to be reliant on Topps to create our cards for us is fantastic. Things like the Rookies App are great for people who can’t make their own customs. And for those of us who have a bit of design/production prowess, all we have to do is take that plunge into creating a bunch of 2.5″×3.5″ documents.

Battlin’ Bucs has already jumped on board this idea and I figured it was worth taking a stab as well. A full-on Documentary-style 162-card set is a bit ambitious but I can totally do highlights. Since I didn’t feel like creating my own design from scratch I decided to rip off 1993 Upper Deck.

I’ve always loved this design because of how much it showed could be accomplished with just text. The masking of the words at the top is achieved by just deleting a character. The drop shadows are just the same text shifted a point down and to the right. It’s a sharp look which emphasizes the photo.

Of course I tweaked it a bit. Since this is a Giants-only set I put the team name on the top of the card instead. And I swapped out the gradient to be the Giants’ colors. And the script font is Mistral instead of what Upper Deck used since I don’t keep to many script fonts handy. Does Mistral date this horribly? Kind of. But I’ve also come to like it for what it is as well.

I liked the first card so much that I decided to do a few more highlights. Once the template is set up it’s easy to just keep making them. The hardest part is finding the photos from various news sites on the web.

One of the wonderful things about baseball cards is that because they’re so small, sourcing photos from the web is actually possible. 900×600 pixels is plenty big enough here. It’s just a shame that so many websites have switched to video-only content and no longer have photos now.

The only problem with letting the web be my photo editor is that I risk having a highlights set of all home run photos. This is so far an accurate reflection of the season so far but I really hope things get more diverse moving forward. 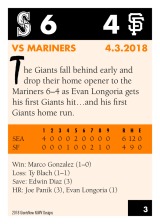 With the fronts coming along it was time to think about the backs. These are much harder since typesetting statistics is a pain and besides, the point of these cards was to emphasize highlights from the season.

A short paragraph writeup of the game is enough. Having the line score is fun. And since Wikipedia’s logos are all SVG you can tweak them in Illustrator for whatever you need them to be. I’m not as taken with these as with the card fronts but they serve my purpose.

I’m not sure how many highlights there are going to be this season. As a fan more highlights would be preferable but that will also drag this project from being something fun to being a complete slog. At this rate though a 99-card set would be my goal. Now that I have the template set up, this shouldn’t be too hard to bang out.

The other portion of this project is the idea of a living roster set. Not every player will make it onto a highlight card but it’s nice to have a record of everyone who appeared in the uniform over the season. 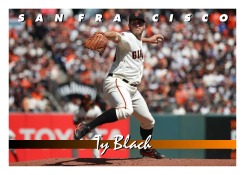 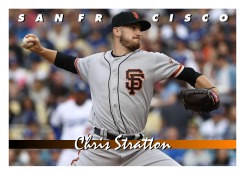 I didn’t have the ganas to create a new design for this. Besides, the interesting thing about sourcing photos from the web is how so many of them are horizontal shots. This template works really well with horizontal images and I’m enjoying seeing the possibilities that come from just dropping photos in.

I’ve also been trying to get photos of players as close to their first game of the season as possible. I may update later if an especially great photo comes out but part of what I’m liking about the idea of a living roster set is that it grows as more players put on the uniform. 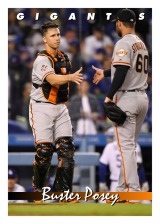 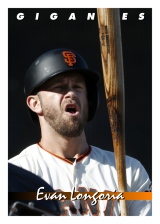 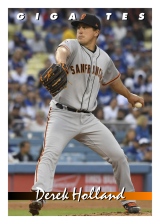 Not all photos are horizontal however so I had to tweak things again for the vertical design. I didn’t like how cramped “San Francisco” was at the top so I switched it out for something shorter. Yes it’s in Spanish. Yes we call the team this locally. Yes it’s my design anyway.

The nature of the vertical design is more awkward for the action photography but lends itself to other interesting compositions. Like I’ll probably change Austin Jackson’s photo at some point but I like it for now.

At this point though, since the Giants have already used their entire 25-man active roster I’ve been able to get in-game photos of all but two of the guys. This means that the project now only entails upgrading images and noticing when someone like Bumgarner comes off the disabled list or when there’s a minor league transaction such as today’s activation of Tyler Beede and deactivation of Roberto Gómez. So I can take things easy for a bit until September gets here and hopefully by then a lot of those guys will already have made appearances.

The backs of the roster cards are even more of a challenge though. For my purposes they need to both summarize the season and also mark when he first appeared with the team this year. I thought a little bit about going with full stats but decided to just go with one line for the season.* I’ll probably add an additional line of text for anyone who gets traded to show when they joined or left the team.

*Current stats on these backs are placeholder text so I can see how much fits and everything. I’m not touching stats until the season ends.

Cards will be numbered in the order players appeared with the team as well. This is partially for my sanity as I can just add a card to the end of my document whenever someone makes their debut but also intends to give me a summary of how the season progresses. This will also allow the first page of this set to be the Opening Day lineup* which is a little detail I’m especially happy with.

*I’m putting Bochy as card number 10. And no these existing back images do not have the final numbers at all.

How do I intend to print these? No idea. My best guess is to put a bunch on a large sheet of digital printing, glue fronts and backs together, and trim everything myself. Not sure how many sheets this will take. The other logical solution is to get cheapo 4″×6″ prints and glue those together before trimming. This will be more work but at less than 20¢ a print it means I could do this whole project for $30.

Of course all this assumes I’ll even finish this project this year (watch this space in November). But it’s been fun so far and I’m hoping the peer pressure of other guys in Card Twitter doing their projects and showing their progress keeps me on task.