One of the baseball card tweeps who I talk with a lot is @junkwaxtwins. He’s a Minnesota fan living in Texas who’s especially interested in miscuts and printing errors. I sent him a small package of miscuts and Minnesota oddballs a while ago and I just received a small package from him as part of his celebration about hitting the 2000 followers mark on Twitter.

This package consisted of two parts. Part one was for me. 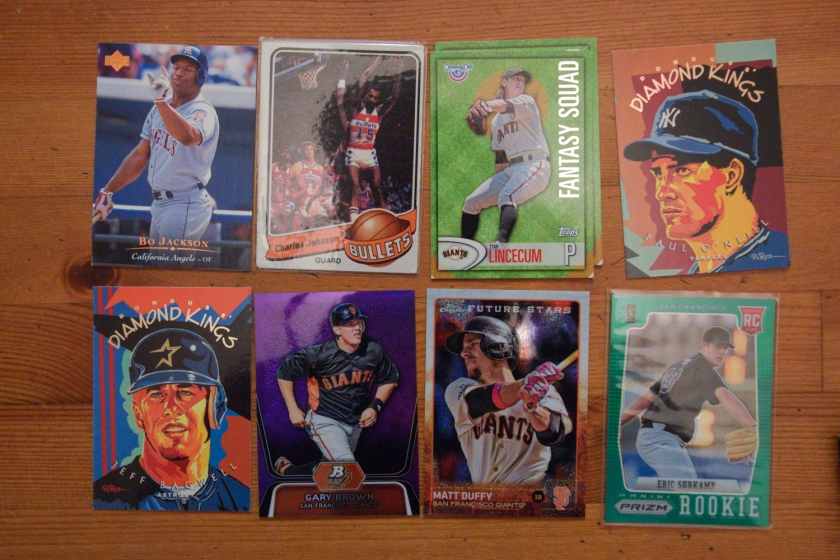 Highlights here are the wonderful combination of a Donruss Elite card with a Sportflics card. And also Bo Jackson as an Angel. My brain can’t grok that at all.

Donruss Elite was one of the first major chase cards in the hobby. Yes we had things like the Griffey Jr Upper Deck Rookie or the Billy Ripken error, but the idea of inserting a special, super-hard-to-find card was somewhat novel. We’d had the 1990 Upper Deck Reggie Jackson signatures the previous year but that was in packs that most of us kids couldn’t really afford. 1991 Donruss though? Totally affordable.

Still, I’ve never seen an Elite card before. Given what the hobby would turn into this is a wonderfully plain and simple card. No fancy card stock, just foil stamping and number out of 10,000.* It’s a very fun reminder of a simpler time.

The Giants cards are all fun too. Always enjoyable to get a Lincecum. The Brandon Crawford rookie is great. The Jonathan Sanchez confuses me immensely since it’s so thick. As someone who puts cards into binders I still don’t know what to do with these thick cards.

Part two however was for my sons.

They were excited to see the pack and couldn’t wait for me to open it. I dutifully explained to them that it was a wax pack made of paper that had been stuck together and opened it slowly so they could see how it all worked.

The first thing we had to do was carefully unstick the gum from one of the cards. No damage. They were intrigued by the gum but did not try. I did. It turns to dust and never becomes chewable. I had to rinse my mouth out.

The cards though are pretty cool. Both boys love the Christopher Reeve Superman films and while they prefer the first one, they appreciate that I prefer the second. Of the twelve in the pack I like the one of the villains escaping the Phantom Zone and the one of Clark Kent getting his revenge on the asshole in the diner.

In a bit of a minor miracle the boys managed to split these into two piles of six without fighting. More predictably they promptly badgered me for binder pages so they could properly sort them.

It’s funny. Once I started collecting baseball cards I never considered any other sports—let alone non-sport cards like these. I never saw the point. I get it more now although I daresay that it only works when the movie cards are of something from pop culture which has achieved staying power. In the same way that it’s been fun to introduce my kids to Superman the Motion Picture, seeing and having these cards is another aspect of pop culture we can bond over.

Now I need to figure out what to do with the blank card the I’m supposed to “decorate” and sign and return. It’s a little small for my kids to draw on* but we’ll figure something out.

*My eldest did make a special 1:1 custom for Peter as a result of being on the receiving end of a large mailing of Giants cards.