Since I was at the Cantor Center, I wandered across campus to the library to see whatever special exhibition they had up. Oh boy did I luck out. Turns out it was a Peter Koch show.

So beautiful printing. Bookbinding as part of the design instead of merely being a craft. And fantastic woodcuts and photogravures. As a print geek the only problem is that everything’s under glass and I can’t get as close a look at things I wish I could. 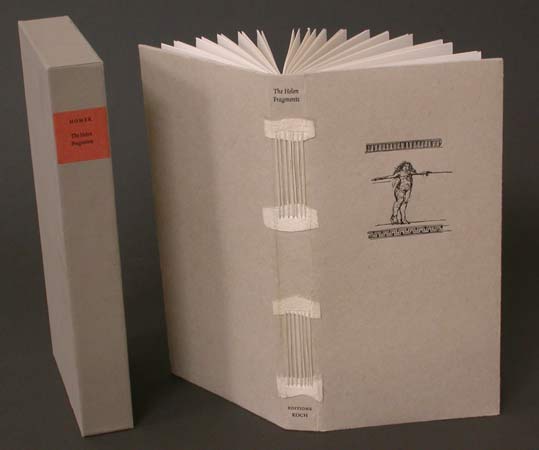 What I can see is great and I love that the library had enough specimens to be able to display both a spread from the book and the binding itself. While print is a craft which people take for granted, bookbinding is one which makes printing look like common knowledge.

Koch’s bookbinding is frequently gloriously about the binding. This isn’t just the kind of thing where you can see bumps on the spine where the cords are under the leather, in these cases the stitching isn’t hidden at all and functions as a design feature. Look at the book and you can see how it was made. I can only imagine what handling such a thing must be like.

The printing, particularly the typesetting—is also often virtuosic. Small pieces like Real Lead do things with type and typefaces which most of us shouldn’t even consider trying. Other pieces are more traditional but show how beautiful properly-selected fonts can be—especially when given enough white space to breathe.

But Koch’s books are not just about type.* They frequently include images and these, while not always printed by Koch, are as well crafted as the text. In particular I love Richard Wagener’s engravings. His work appears in a couple of books but I love the Sierra Nevada prints most of all. They look high contrast but there’s so much shadow detail in them when you look closely. Online images don’t do them justice.

Other books feature photographic prints, photogravures, and watercolors. In the small print runs which these were made, the special care taken with the images really shows. 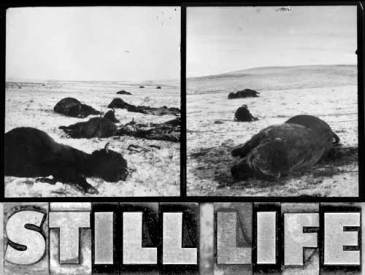 It’s nice to see too that Koch’s work embraces digital techniques. The photogravures went through a digital intermediate. It looks like a lot of the type is also set by computer rather than being cold metal. And many of the books and prints use digital printing for the images.

His Lost Journals of Sacajewea book in particular is a great example of the mix of digital and traditional techniques. Hand-made paper with digital photographic printing as well as letterpressed type. The resulting product looks great.

And the content also looks amazing. One of the things it’s easy to miss with these artist books is how important the actual content of the book is. The craft is overwhelming but it’s important that the book itself be worth reading too. Many of the poems and texts look good. The Lost Journals of Sacajewea though looks great—both in terms of the content of the writing and the general subject matter of the work.

Koch is very interested in investigating and challenging the myths of The West while still operating in a printmaking and publishing tradition which stems from those days. So many of his projects look like Old West publications until you look closer and see how they’re challenging everything.

Two of them—Hard Words and Nature Morte aren’t even letterpress works. These are purely digital series where Koch placed wood and metal type directly on the scanner with the photograph and printed the resulting composition. And even here, despite the purely digital workflow, these manage to reference the history of The West. I couldn’t help but think of Mark Twain’s teenage portrait with “SAM” in the composing stick and the way that both printing and photography play with negatives and reversals in the image.

My top-ten list of best/favorite exhibitions I saw this year. These are shows which got me thinking and which I recommended, without reservation, to anyone (and everyone) I knew.

Looking at the Land by Flak Photo shows suburbia all grown up. The suburbia I know. The photos feel right to me. Also, this is the best example of our new world which recognizes curation as a creative act. The promise of more of these online exhibitions is very exciting.

The 1968 Exhibit at the Oakland Museum of California reminded me of how far we’ve come and provided me with context and information which helped me understand my parents’ generation better. This was a very ambitions show which came very close to achieving everything it set out to do.

Rineke Dijkstra at SFMOMA was a textbook example of a show which was more than the sum of its parts. And how art isn’t always supposed to be nice to look at. This was art which is hard to look at, but worth seeing. Very powerful. Very raw. Very true.

7. South Africa in Apartheid and After

South Africa in Apartheid and After at SFMOMA was beautifully timed to open right after election day. This show was a gentle, but powerful, reminder of how what looks respectable and desirable can mask enormous injustice. And how mistreating a population of workers to achieve that society leaves long-lasting wounds.

Walker Evans at the Cantor Arts Center showed all of Evans’s work and not just his FSA depression-era photos. It was great to see and a nice reminder of how talented Evans was. As a design major, Evans’s consistent search for the functional in his photography excites me. As a photographer, his crisp composition and eye still stand out.

Mark Bradford at SFMOMA was a bit of a surprise for me. I didn’t know what to expect and was very please to find fantastic work which revealed new things no matter how close or far away I stood. Individually they’re all great. Together, they’re even better. So many layers of history and personal reinvention in them.

Monuments of Printing at the Stanford University Library showed all kinds of rare/fine books. Catnip to this typography nut. A Kelmscott Chaucer? A Doves Bible? Excuse me while I geek out.

3. Less and More:
The Design Ethos of Dieter Rams

Dieter Rams at SFMOMA meanwhile was catnip for this design nut. While his products are starting to lose relevance, Rams’s design principles have not. It’s always great to see the actual objects when talking about good design.

Mexicanismo at the San José Museum of Art was my favorite of the year by far. Cool and obvious while also being smart and subtle. Extremely insider-friendly while also being accessible and descriptive of the culture to outsiders. I only wish there had been a catalog available so I could show it to other people.

Other notable artwork this year

My trip to Stanford to see Walker Evans was also timed so that I could catch the second part of the Monuments of Printing exhibition at Green Library. The first part was very good. It was more of an exhibition of the evolution of type and printing rather than design and I enjoyed it from a technology point of view. Part two picked up the final bit of type design but quickly got into the Arts and Crafts Movement.

Which is the portion I was really interested in. The older books are interesting—if not beautiful—to look at but they also all contain flaws since they’re still finding their way through the technology. While Stanford calls it the Book Arts Revival, this exhibition shows that it’s really a distillation of everything good from historic book design.

In the same way that I found myself wanting to handle the books on display in the Art of the Book Exhibition, I would love to leaf through the Kelmscott Chaucer or the Doves Bible. We don’t make books like that anymore and these books cry out to be both read and treasured. It’s fantastic to be able to see them in person and really see the craft which went into them. It’s also clear that these books are meant to be more than just for reading. These are books* as devotional objects.

*And by extension, their contents.

Which is a point of view that I’m okay with. It’s obvious in the exhibition is that there is a threshold of importance which must be reached for a text to be considered worthy of publication—Chaucer, Shakespeare, the Bible, and Milton are featured a lot. The books I covet from the Folio Society are all classics like these too.

This makes sense considering how expensive traditional publishing has been. It’ll be interesting to see what happens as publishing dies and books stop being commodities.

This weekend I went to Stanford to see the Monuments of Printing exhibition at Green Library.* I’m a bit of a printing nut as well as a type nut so exhibitions of book design and typesetting are always up my alley.

*It’s been almost a dozen years since I spent any time in there. Heck, I’m still getting used to the Bing Wing. It’s also interesting to visit as a guest and be asked things like “Is this your first time visiting Green?” In many ways, enough has changed that, even though I used it as an undergrad, I really haven’t visited this incarnation of it.

The exhibition is pretty good—as long as you already know a lot about the history and craft of type. If you don’t know what ligatures, counters, etc. mean, you’re in for some trouble. Similarly, the term “gothic” is never fully explained even though, unlike “roman” or “italic” (which are explained), gothic no longer means what it used to.*

*Gothic once described Germanic letter forms. Then it became known as blackletter and survived to the 20th century as fraktur long after most of the rest of Europe converted to roman type. In the mid-19th century, gothic started to be used as a synonym for sans-serif type and survives today in fonts like Franklin Gothic which have nothing to do with the gothic font used in the Gutenberg Bible.

I did enjoy the descriptions of where roman and italic came from and I was pleased to learn about civilité. That alternative, local variants to the too-italian italics were considered (but eventually discarded) is both extremely interesting and a nice reminder of how art and technology evolve. Too often we just see the successful developments and not the failed experiments. That civilité failed due to an abundance of ligatures and alternate characters means that, if done correctly, P22 Civilite should be a lot of fun to play with.

What I would have liked to see more of was a discussion of craft. It wasn’t clear to me if we were looking at the craft of the book, layout, or just the type. Discussions of book formats (octavo vs. quarto etc.) and intents were barely present. And discussions about typesetting were practically absent. Many of the books showed the evolution of reading aids through typesetting* but you had to really pay attention to see them.

*From a solid block of text with pilcrows inline to separate the paragraphs to more-modern extra leading between paragraphs.

All that said, I did enjoy it and am looking forward to the second installation featuring the book-arts revival next year.